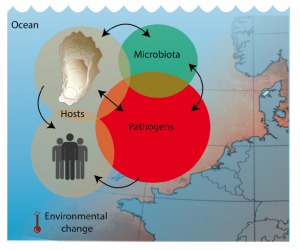 The Impact of Environmental Changes on the Bacterial Community Dynamics of the Pacific Oyster, Crassostraea gigas, and the Distribution of Pathogenic Vibrio species

Oysters host diverse microbial communities in coastal regions. Whether these microbes are resident to the oysters or are just passing through, they form complex relationships with the oyster and each other, all under variable environmental conditions. Oyster farming is economically important around the globe and opens the doorway to marine bacterial infections in humans. The bacterial genus Vibrio contains over 100 species distributed across fresh water and marine environments. The three most famous Vibrio species, V. cholerae, V. parahaemolyticus, and V. vulnificus, are known human pathogens capable of causing gastroenteritis, wound infections, and primary septicemia. While non-pathogenic strains of these species exist, and there are nine other known human pathogenic Vibrio species, these three are the most common suspects behind illness after raw shellfish consumption.

Changes in environmental conditions have increasingly been linked to the proliferation of pathogens, human or otherwise. Since oysters are affected by disease outbreaks, mass mortality events, and are a prime example of zoonotic bacterial transmission to humans, there is an increasing demand for the better understanding of disease and its influence on population dynamics in oysters in response to the changing environment.

Our work on Vibrio species and the Pacific oyster, Crassostraea gigas, falls under the framework of the French and German collaborative ENVICOPAS project. ENVICOPAS, the impact of Environmental change on Coastal Pathogen Systems, aims to investigate the dynamics of oyster and human pathogens, the oyster microbiota, and variable environmental factors. The ultimate goal of ENVICOPAS is to develop predictive tools for the risk of disease based on biotic and abiotic factors. My project focuses on environmental bacterial/pathogen community dynamics in the oyster bed along the coast of Sylt, Germany in the North Sea, and studying the ecological niche of pathogenic Vibrio species. Methodologically this includes isolation campaigns for environmental Vibrio species, most probable number PCR, next generation sequencing, the development and generation of stable pathogenic and non-pathogenic fluorescently-labelled Vibrio strains, and in-vivo and in-vitro growth experiments.

The project is a cooperation project with researchers from the Alfred Wegener Institute for Polar and Marine Research at Sylt and Helgoland, Dr. Mathias Wegner and Dr. Gunnar Gerdts, as well as with scientists from IFREMER in France. The project is funded by DFG and ANR. 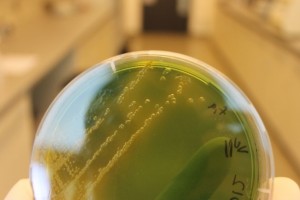