The marine gram-negative bacterium, Marinobacter adhaerens HP15, was previously shown to specifically attach to diatom cells, to induce transparent exopolymeric particle formation, and to lead to aggregate of phytoplankton cells. These processes might be highly relevant for the sinking of organic carbon in the ocean. Since M. adhaerens HP15 had been shown to be genetically accessible, a detailed study of the interaction between this bacterium and the diatom, Thalassiosira weissflogii, will be undertaken. For this, an In vivo expression technology (IVET) screening will be conducted in order to identify diatom contact-induced genes in M. adhaerens HP15. Respective genes will be cloned, mutagenized, and further characterized in terms of their role in the diatom-bacteria interaction. Likewise, extra-cellular protein profiles of M. adhaerens in vitro and in situ (i.e. during the interaction with T. weissflogii) will be comparatively analyzed. Interesting proteins will be identified using MALDI-TOF analysis and their genes will be subjected to mutagenesis. Results of this study might reveal important new insights to the molecular basis for the diatom-bacteria interaction. 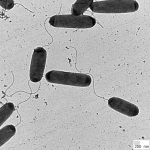 Electron microscopy of Marinobacter adhaerens HP15, the model organism used in this study