The plant-borne disaccharide, sucrose, is a readily available carbon source for plant pathogens, bacteria of the oral cavity, and microbes associated with bio-ethanol production. These microorganisms use the extra-cellular enzyme, levansucrase, to release glucose from sucrose and to polymerize fructosyl residues into the branched polymer levan. Our previous studies showed that two levansucrases of the gram-negative bacterium, Pseudomonas syringae, i) are expressed in a temperature-dependent manner; ii) showed distinct export and secretion patterns distinguishable from any classical protein secretion pathway; and iii) led to an accumulation of levan in ‘storage compartments’ of biofilms. In my project, it will be determined how levansucrase gene expression is regulated, how the enzymes are transported via inner and outer membrane, and what the actual physiological role of levan formation is in context of carbon metabolism. The role of a newly identified regulator and its interaction with three repressors will be investigated. The export/secretion pathways of both levansucrases will be identified and characterized. The hypothesis that levan formation might be a form of bacterial ‘waste disposal’ for later carbon recycling will be tested, and the individual enzymatic activities of both iso-enzymes will be elucidated. 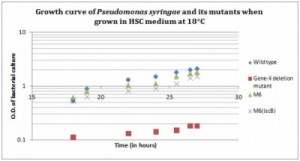