The genus Rhododendron is the most diverse genus of woody plants belongs to family Ericaceae. There are approximately one thousand species distributed all over the world.

Rhododendron-Park Bremen is the second biggest Rhododendron Park over the entire world, which includes more than quadrate of Rhododendron species. Therefore, this is a good opportunity to test almost six hundred species which exist in this park. Rhododendron project is an interdisciplinary work between four major; microbiology, cell biology, biochemistry and genetic. 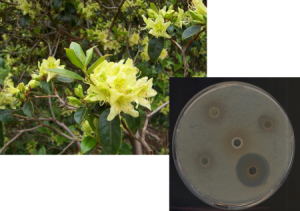 In this project my contribution involve the microbiology and cell biology parts, first we are going to test the minimal inhibitory concentration (MIC) of different extract from Rhododendron species against Gram positive and negative bacterium by agar diffusion method. The second step is

analyzing the best Rhododendron extract that give best inhibitory effect in two different cells type -Keratinocyte (skin tissues) and epithelial cells of the intestinal- in order to know in which way the drug can be used either topical or oral treatment.