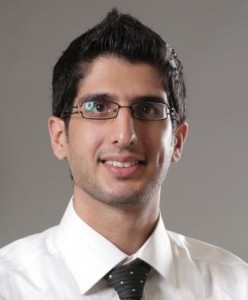 Molecular analysis of the role of LscR, a small regulatory protein involved in expression of levansucrase in Pseudomonas syringae pv. glycinea PG4180

Pseudomonas syringae is a phytopathogenic γ-proteobacterium that induces a wide variety of leaf spots, speck, and blight diseases on various agronomically significant crops, as well as on an unknown number of wild plant species. Virulence of the bacterial blight pathogen of soybean, Pseudomonas syringae pv. glycinea PG4180, is favored by the temperature dependent production of levansucrase, an enzyme needed for production of the exopolymer levan and encoded by lscB/lscC. Expression of lscB in the heterologous host, Pseudomonas putida KT2440, required a PG4180-borne gene designated lscR. Our preliminary research focused on understanding the role of lscR in expression of levansucrase. Different plasmid constructs were transformed into P. putida KT2440 wild type and then grown on MG plates containing 5% Sucrose. Plates were incubated overnight at 28°C then transferred to 18°C and left for 10 days. Our results showed that transformants carrying either lscR or lscB are levan negative. However, when P. putida KT2440 carried both lscR and lscB, a positive levan phenotype was observed characterized by a white dome shaped colony. An interesting additional phenotype was observed when we compared the effects of two plasmid constructs: one carrying only a 1,350-bps region containing lscR, the other harboring a ~25-kb region contained in a cosmid and flanking lscR. The P. putida transformant carrying the 1,350-bps lscR region showed a ‘swimming-out’ phenotype. In contrast, the P. putida transformant carrying the cosmid showed a regular, evenly edged colony morphology without signs of swimming. Because of the exciting phenotypes, current focus is on creating a PG4180 lscR mutant to investigate its effect on levansucrase expression. Moreover, in planta assays of PG4180 and its lscR mutant will be performed on soybeans plants to investigate whether lscR gene plays a role in the virulence of PG4180. 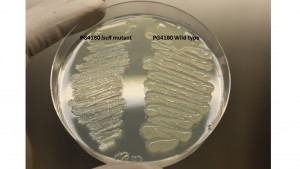