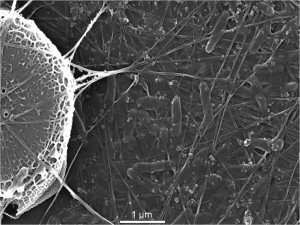 One of the major efforts of 2008 was the establishment of a molecular model system to investigate diatom-bacteria interactions in the ocean. No such system exists at all – since most marine microbiologist so far preferred to investigate this interaction from a rather ecological point of view. Establishing a model system for this interaction allows identifying genes and gene products important for this interaction, We established a reliable assay for the bacterial attachment, demonstrated the genetic suitability of the system, determined its complete genome sequence, and showed that the used bacterium is essential for marine snow formation. Marine snow formation leads to carbon dioxide fixation and thus might enable us to contribute to the major research field on global warming. The different project within this theme are done in close collaboration with scientists from the Max Planck Institute for Marine Microbiology Bremen and the Alfred Wegner Institute for Marine and Polar Research, as well as with Dr. Hans-Peter Grossart (Neuglobsow) and Dr. Uta Passow (Santa Barbara). 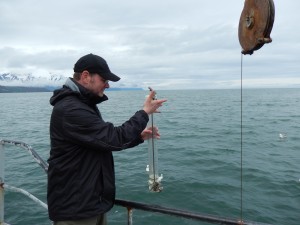